and we will soon celebrate love and generosity with Spirit of Giving 2021: Smile Behind The Mask, a charity online concert for the benefit of Philippine General Hospital (PGH) Medical Frontliners and PARCaralan Scholars, this Saturday, December 4, 2021, starting 7:30 PM (GMT +8). Dr. Raul M. Sunico, multi-awarded international concert pianist and music author, former president of the Cultural Center of the Philippines, dean of the College of Music and the Performing Arts of St. Paul University Manila, and vice chairman of the board of trustees of The PARC Foundation, encourages everyone to support the medical frontliners from the Philippine General Hospital and the PARCaralan Scholars by watching Spirit of Giving 2021: Smile Behind The Mask, a charity online concert, on December 4, 2021, Saturday, 7:30 PM (GMT +8).

Spirit of Giving 2021: Smile behind the Mask | Mary Grace Khu Mary Grace Khu will be joining as our main host in Spirit of Giving 2021: Smile Behind The Mask, a charity online concert for the benefit of Philippine General Hospital (PGH) Medical Frontliners and PARCaralan Scholars, on December 4, 2021, Saturday, 7:30 PM (GMT +8).

Spirit of Giving 2021: Smile Behind The Mask | PARCaralan Scholars When COVID-19 hit, the PARCaralan Scholars had to rely on meager resources raised through previous fundraising activities of The PARC Foundation to be able to continue getting free educational assistance and life skills training programs in music, arts, and theatre.

We at The PARC Foundation can only do so much. We definitely need help.

Spirit of Giving 2021: Smile Behind The Mask | Gigi De Lana and The Gigi Vibes Some of the finest talents here in the Philippines like “Asia’s Phoenix” Morisette Amon and “The Country’s Premier Wedding Band” 3rd Avenue, impressed us with their musical talents in Spirit of Giving 2019 at Conrad Hotel and Spirit of Giving 202o at DigiPARC, respectively.

This December, get ready for Gigi De Lana and The Gigi Vibes in Spirit of Giving 2021: Smile Behind The Mask, a charity online concert for the benefit of Philippine General Hospital (PGH) Medical Frontliners and PARCaralan Scholars.

Spirit of Giving 2021: Smile Behind The Mask | Nicole Asensio Award-winning singer-songwriter Nicole Laurel Asensio is pleased to invite everyone to watch Spirit of Giving 2021: Smile Behind The Mask, a charity online concert for the benefit of Philippine General Hospital (PGH) Medical Frontliners and PARCaralan Scholars, on December 4, 2021, Saturday, 7:30 PM (GMT +8).

Spirit of Giving 2021: Smile Behind The Mask | Corey Koh UPDATE! Here's a #ProjectTEMPO Fundraiser Update! Over the past month, we have now raised Php 45,015! It's slow and steady progress and we would like to thank all our generous donors for helping our #PARCaralan scholars!..

Here's a wunderbar picture of Mixed Voices with our #PARCaralan Music Scholars after their choral workshop last Sunday! Listen to this wonderful collaboration TONIGHT!.... 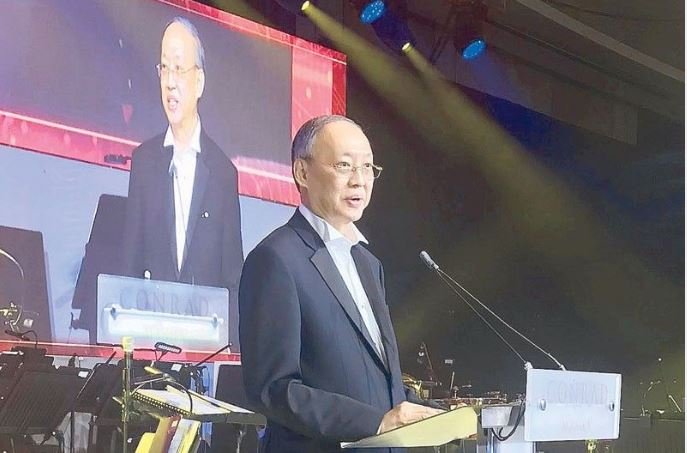 In the natural order of things, we’ll often read about how a foundation or a notable endeavor is dedicated to the memory of a father or mother, how the children are carrying on a tradition set by their parents.

In the case of PARC, the Performing Arts and Recreation Center Foundation, found on Lt. Artiaga St. in San Juan City, there’s a unique reversal of order an exemplary vision started by a son, and now carried on by his father, due to the son’s untimely demise..

Co-founder and executive director of the Performing Arts and Recreation Center (PARC) Foundation Issay Nodalo gets emotional thinking about the the success of the first-ever “Spirit of Giving: The Performing Arts Ball” held recently at Conrad Manila. 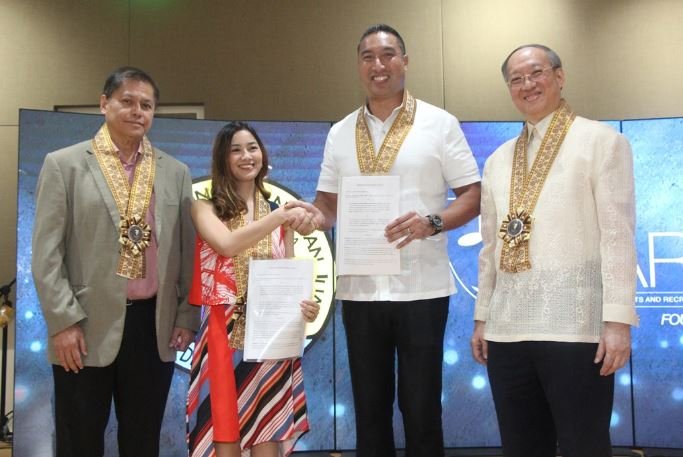 Two years after the Performing Arts and Recreation Center (PARC) Foundation founder Wilmer Ong Guido passed away, the name of the building’s main studio was made eponymous.

Wilmer’s father, William T. Guido, current chairman and among board of trustees of PARC Foundation, said the venue is envisioned to be the dance park for the career of emerging and budding Filipino artists, including the PARCalaran scholars.

This exclusive red carpet charity ball is the first of its kind in the Philippines, highlighting the potential of performing arts to transform the lives of the Filipino youth. The event was done in cooperation with the Singapore Embassy in Manila,Global Cultural Alliance, Millet World, Chinoy TV, and Manila Bulletin. The evening also serves as a culminating event for the 50th anniversary of the bilateral ties between Singapore and the Philippines.

“May the spirit of Christmas be always in our hearts…”

The Christmas spirit of generosity was unmistakable in theair of the ballroom. The pre-event program featured a charity auction. Items generously donated to The PARC Foundation for the event were open for bidding, featuring artworks by Juvenal Sanso, Ranjit Das, Master Sun Yu-li, the winners of the National Digital Arts Awards, and a Steinway B-211 grand piano from Steinway Boutique Manila.

The main program began with acknowledging the presenceof the evening’s guests of honor: Senator Emmanuel “Manny” Pacquiao and Vice Mayor of the City of Manila Ma. Sheilah "Honey" Lacuna-Pangan, who have both wholeheartedly expressed their support for the youth and the arts.

Moreover, Mr. Edgar Saavedra, Chairman of Megawide Foundation, received a plaque of appreciation from The PARC foundation for their pledge of long-term partnership.From this point, a pioneering life skills exchange program is underway to train scholars from the families of Megawide Foundation employees and, at the same time, provide career opportunities to the families of PARCaralan scholars.

“Dreams inspire worlds for change… lead us to better places…”

For this one special night, performing artists from different generations, belonging to different nations and spanning different genres gathered to give PARC’s supporters a glimpse of what the PARCaralan Scholars can be in the near future.

The PARCaralan Music Scholars with their stringinstruments, together with the young hip-hop troupe Stylo Mylo Crew from Singapore’s Little Arts Academy, and the budding singer Christine Gabrielle Francisco gave a rousing collaboration of Whitney Houston’s “Greatest Love of All.”

Dazzling performances kept the crowd on the edge of their seats as homegrown talents from both the Philippines and Singapore entertained the audience. Gracing the stage were “Asia’s Phoenix” Morissette Amon, foremost vocal harmony group The CompanY, and the country’s beloved Father of Christmas Carols, Mr. Jose Mari Chan.

The Manila Philharmonic Orchestra under the baton of Maestro Rodel Colmenar, an excerpt of “The Nutcracker” by Philippine Ballet Theatre, and renowned pianist and member of PARC's Board of Trustees Dr. Raul Sunico gave a spotlight on more Christmas classics, the rich sounds of the Steinway & Sons grand piano echoing throughout the ballroom.

To represent Singapore, Corey Koh exhibited hisexceptional skills as a 17-year old classical tenor, while international jazz singer Michelle SgP serenaded the crowd with her original song “Dreams,” a highly significant song that carried the theme of the night.

“A million dreams are keeping me awake…”

You may recall the hit 2017 biographical movie-musical featuring the visionary achievements of a poor tailor’s son,who achieved his dreams through grit, wit, and belief in those who society has given up on.

Almost 200 years later, the heart of “The Greatest Showman’s” P.T. Barnum has lived on in one particular advocate for the arts, his dream and vision transcending from himself into the hearts of countless others.

More than a fundraising event, the night was also a tributeto The PARC Foundation’s young and visionary founder,Wilmer Ong Guido. Very much like P.T. Barnum, Wilmer believed in where his dreams could take him. Wilmer envisioned providing a safe space for artists to grow and hone their crafts in a cultural center in San Juan.Unfortunately, his untimely passing in late 2017 put those dreams on hold as he left a gaping hole in the foundation’s heart.

January 2019 came as a breath of fresh air as co-founder Ms. Issay Nodalo stepped up to become PARC’s Executive Director with the newfound support of Mr.William Guido,Chairman and CEO of the Guido Group of Companies and Wilmer’s father.

The past year saw PARC grow exponentially through partnerships, networks, donors, and patrons. Support came in the form of partnerships with Singaporean group The RICE Company Limited and its subsidiariesGlobal Cultural Alliance and Millet World, leading to the Singapore Embassy in the Philippines showing their support for the future of the foundation.

It seems that Wilmer’s dream is slowly coming together as it should be. By 2025,The PARC Foundation aims to reach the goal of 300 scholars helped, supported, and provided for. With this season’s Spirit of Giving, we can see that not one, but a million dreams have indeed taken flight for the night.

For more information, you may visit www.theparcfoundation.ph or facebook.com/PARCph or contact (02) 8350 6356.

Here’s a glimpse of the opening ceremonies from “Spirit of Giving” featuring our esteemed Guests of Honor, Senator Manny Pacquiao and Vice Mayor Honey Lacuna of the City of Manila (Manila Public Information Office). We also thank Mr. Ed Saavedra and Megawide Foundation’s generosity towards the future of the #PARCaralan Program and its scholars. A massive show of gratitude as well to our lovely Master of Ceremonies for the evening who kept our guests alive and kicking, Ms. Issa Litton!

“Spirit of Giving: The Performing Arts Ball” is presented by The PARC Foundation in cooperation with Singapore Embassy in Manila, Global Cultural Alliance, Millet World, Chinoy TV 菲華電視台, and MANILA BULLETIN for the benefit of our #PARCaralan scholars 👭👬 #PerformingArtsBall #SpiritofGiving2019 #PARCph

“Wisdom made me realize I cannot do it on my own. Because I experienced how it is to win with the help of others, I am all the more committed to help others win.”

We would like to thank our Guest of Honor, Honorable Senator Manny Pacquiao for supporting our scholars. May they look up to you as a symbol of resilience and determination in the face of life’s trials. Mabuhay ka, Pacman!

“We join you in your initiative...in your creative intervention and creative actions to change the lives of the gifted underprivileged children and struggling artists.”

We would like to thank the Vice Mayor of the City of Manila (Manila Public Information Office), Honorable Dr. Honey Lacuna for gracing our event and representing the City of Manila and Mayor Isko Moreno Domagoso’s support for the #PARCaralan Program and its scholars.

Let the show begin! We were treated to a feast for the eyes and ears as these artists opened up everyone’s hearts to the performing arts. Thank you to Morissette Amon, The CompanY, Jose Mari Chan, Manila Philharmonic Orchestra, Philippine Ballet Theatre, Corey Koh, Dr. Raul M. Sunico, and Michelle SgP for sharing the stage and your talents to our audience 🎶🎤🎻💃 The evening was truly a celebration of the performing arts for the Philippines and Singapore for our #PARCaralan Scholars and the #SGPH50 anniversary this 2019 🇸🇬🇵🇭

And that’s a wrap! The PARC Foundation wishes to extend their most heartfelt gratitude to everyone who attended “Spirit of Giving: The Performing Arts Ball!” To all our partners, sponsors, guests, friends and family, and the whole team involved in the success of this evening. The Spirit of Giving could indeed be felt with the Christmas cheer. We hope to see you all at The PARC soon! 🧡✨